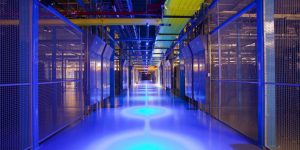 As of 2018, more than 4 billion people were connected to the internet. An  internet connection is vital for almost all businesses, including a UPS Battery Shop. The need for more processing power and data storage has facilitated the growth of data centres in size over the past decade. More and more data centres across the globe are constantly being updated to help keep up with the need for data storage. Here are some of the biggest data centres in the world – according to Gigabit Magazine.

According to the World Data Centre, China Telecom Data Centre is the largest data centre in the world. Located in the Inner Mongolia Information Park, the data centre spans an area of 10.7mn sq. ft which hosts call centres, cloud computing data centres, warehouses, living quarters for staff, and offices. The facility cost more than $3bn to complete, and is hence considered the most expensive data centre on the globe. Its geographical location, Hohhot, has all the qualities needed to house the world’s largest data centre. For starters, this area receives an annual rainfall of 12in, hence is capable of producing enough hydroelectric power to ensure seamless running of the same. The climate here is favourable enough, with an average altitude of 1050 metres above sea level, and an average temperature of 6°C. The location also makes it possible for technicians here to take advantage of ‘free air cooling’ for up to 10 months in a year.

The second largest data centre in the world is located in Hohhot as well. This makes Hohhot home to 2 massive data centres, both in the Inner Mongolia Information Park. China Mobile Hohhot Data centre covers an area of about 7.7mn sq. ft and cost  about $1.95bn to complete. The facility’s modular design allows for further expansion when needed. According to the World Data Centre, Hohhot provides enterprise services, concentrated network management, cloud computing, and research and development innovation for new technologies. This includes TD-LTE 4G networking.

Although it is yet to be completed, the Citadel sits on  7.2mn sq. ft of land near Reno, North of Nevada. When fully operational, the facility will consume at least 650 Megawatts of power, with all the power generated from renewable sources. The Citadel is built and owned by Switch, and considered among the most innovative data centres in the world. It has more than 260 patented innovations tied to its operation and construction. The Citadel takes advantage of Switch’s hyperloop network, hence is capable of delivering 9ms latency to San Diego and Los Angeles. According to Computer World UK, the network also helps provide 7ms connection rates to the company’s core facility.

Located in the northernmost region of China, Harbin Data centre is considered the most massive structure in Harbin, otherwise known as the ‘Ice city’. The facility sits in 7.1 sq. ft of land and is operated and owned by China Mobile. It runs flagship operations for the company including cloud-based computing and telecommunication data. Like almost any other data centre in China, Harbin gets its power from non-renewable sources, with the facility using up to 150 megawatts of electricity.

This facility spans 160 acres with the data centre taking the form of a 2.1mn sq. ft campus. The Dupont Fabros Technology is comprised of seven separate buildings in Ashburn, Virginia. It has a capacity for more than 10,500 servers and a maximum power load of 208mw. This is according to data obtained from Computer World UK. There are however plans by Digital Realty Trust to purchase the facility for the sum of $7.6bn.