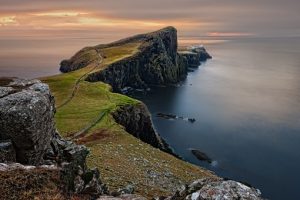 Here is a list of beautiful attractions right outside your UK doorstep, including sand dune beaches and awe-inspiring waterfalls. We normally find ourselves dreaming about far off places across the world when we have a heavy workload or the weather is clammy. To enjoy palm trees, golden sand and deep blue waters however, you don’t have to travel away from the United Kingdom. You’ll be surprised to learn that the following attractions are located in the United Kingdom. Here are some of best locations recommended by Candy Tours to enjoy some exotic scenery in the UK, ranging from turquoise waters to flowing waterfalls reminiscent of Bali.

The white sands of Langamull Beach are the main reason why it is considered to be the Mull Caribbean, often described as one of Mull’s best kept secrets. The twenty-minute long journey to the secluded beach on foot is dotted by impressive views. Visitors can see tiny islands nearby and Skye on a clear day.

After closing back in 1992, Tiniside Lido, which is part of an Art Deco hotel established in 1935, was reopened after a successful local campaign and, in 1998, attained Grade II listed status. While the salt-water pool is great for sunbathing and swimming during summer, the poolside views rival those at Bondi Beach in Sydney.

Three Cliffs Bay is an impressive shoreline made up of the three-signature limestone cliffs, salt marshes and sand dunes located 30 minutes away from Swansea by car. Popular for cottage getaways, glamping and caravanning, in addition to being an ideal location for picnicking, the attraction is also considered to be a picturesque part of the Gower Cost Path.

Portmeirion is considered to be one of the most distinctive welsh villages, planned and built by Sir Clough William-Ellis, to resemble an Italian style village, during the period between 1925 and 1975. Portmeirion’s brilliant restaurants, boutique hotels, and charming beauty ensure that it still attracts tourists in their numbers even though it is located in Gwynedd, North Wales, and not the Mediterranean. The town has, since 2012, hosted a yearly art and music exhibition referred to as Festival N°6 with performances from Hot Chip, James Blake, and the Liverpool Philharmonic over the years.

Located in between cliffs Barafundle Bay, located close to Stackpole village in Pembrokeshire, resembles a secluded bay on a Greek island. Named Britain’s best beach in the Good Holiday Guide, the beach, which is now open to the public, was once owned by Stackpole Court’s Cawdor family and was at one point listed among the world’s top 12 beaches. Offering shelter from the hustle and bustle of day-to-day life through its scenic and secluded nature, the beach is half a mile away from the closest parking lot and is made up of pine trees and sand dunes.

Dorset’s West Bay closely resembles the Algarve, with its impressively clear waters and soaring orange cliffs. While the attraction is great for coastal walks and family holidays due to its seaside location, visitors will also enjoy the awesome food and culture associated with Bridport, a nearby market town.

Kynance Cove is cited as the most painted and photographed location in Cornwall, and would definitely look good on a Sardinian postcard with its beautiful blue sea and white sands. The breath-taking contrast resulting from the cove’s green serpentine rock and white sandy beach creates a landscape that is nothing short of a painter’s dream. While it towering rock formations were featured on Poldark on BBC One, there are numerous islands and sea caves to explore during low tide.

With its colourful structures, golden sands, palm trees and blue seas, there’s definitely something Bali-esque about Tenby. Surrounded by a medieval wall, Tenby, which has been a tourist town, right next to the sea, for more than 2 centuries has a rich history. Three beaches, namely Castle, South, and North are located here. South beach is famed for its golden sands stretching for a distance of over 2 miles, while Castle beach is known for its impressive views and North beach is a great for water sports.