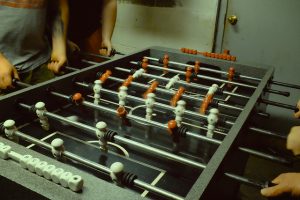 Foosball is an exciting game that borrows from the game of football. It is a form of table football also referred to as “fuzzball”. Some of us enjoyed playing foosball during our childhood. It is one of those activities that you can never grow out of; how you embrace foosball will differ, but the love for the game remains the same. It is not uncommon to spot a foosball table or Babyfoot table in a gaming arcade, a youth club, or even in some homes. If you are interested but hate playing foosball because you keep losing, there are ways of improving your tactics so you can be the winner every time you play against your friends. Below are a few tips on how to master foosball and be a winner.

Always fight the urge to spin in the belief that it improves your chances. Spinning is an illegal strategy in playing foosball and has severe impacts on your efforts to improve your game. For the casual and the novice player, spinning seems to be the best way of increasing the odds of achieving maximum power out of a shot and a strategic approach to disrupting an opponent’s rhythm. However, spinning makes you lose your form and control, turning your pass or shot into a matter of luck. It can even work against you, as evidenced by the many own goals attributed to errant spins that shot the ball hard back to the unsuspecting and often helpless goalie.

What will your move be when a defender straddles your striker? How will you make your move when the opponent’s forward blocks your defender when trying to clear the ball? In most cases, the novice foosball player will panic, get frustrated and make a random shot out of desperation. That shot is more likely to rebound off the opponent. Conversely, the press of play can see you consider passing the ball backwards. The way out of such a situation is to tap the ball sideways and pass it to the next player. This will have your opponent wrong-footed, thus paving the way for you to pass the ball forward before they can respond.

3. Use Your Goalkeeper Properly

Always have your goalkeeper on your weak hand because the goalie has less activity on the pitch. But keep in mind that the goalkeeper also has the most vital role of ensuring the ball never goes into the net. As such, you still need to have a quick, short, and precise response. That means that you should have sharp reflexes. Try to use the goalie to the max. Consider taking the long-range, freak shots to the other end of the table. To master this, you need to learn how to manage the ball outfield with one hand and skilfully control your keeper with the other so that you can react to sudden strikes and rebound shots.

4. Be Ready to Deal with Antagonistic Elements

Hostility in the game of foosball is never uncommon, since either side wants to bag as many goals as possible. Foosball is a serious activity that sees few players make it to the top. Many of us only dream of being winners and thus spend much of our time playing foosball in a domestic setting, where the table is subject to various elements. As a result, you find that the tables are in less than pristine condition. Probably there is a significant slant on the table, every other handle is missing, and all the balls have been chewed up by the pet or your younger sibling. Overall, you will be truly tested when you play in such hostile conditions.

The idea here is to be technical in how you shoot for goal. Be tactical yet with poise. To make the ‘dummy’ shot, you will attempt to make a powerful strike using the power of your wrists, only to stop short when about to hit the ball and do a quick sideways shot to the other striker, who will slot in the ball past the opponent’s keeper. Practise this move and even pull it out of the bag at some point in your game; you can bag at least one goal with this kind of poised move.